One of my biggest challenges in learning how to play jazz music has been figuring out how to practice.  With classical music, my practice has always been very “prescribed” – technical warm ups and practice, followed by working on specific pieces. This might include hands separate practice, slow metronome work and focusing on small sections.  In fact, it was very rare that I would do a full run through of a piece because it was not an efficient use of my practice time.  With my jazz learning project, I feel like I am always jumping to the “full run through” phase without taking the time to build a solid foundation.  Looks like I need to take my own advice! This week I tried slowing down and focusing on some of the fundamental aspects of crafting a solo.  My recap this week highlights that I have a long way to go!

Next week will be my final learning project post. I plan to reflect on my progress over the last two months and make a plan for future practice.  This is only the beginning of my jazz journey! 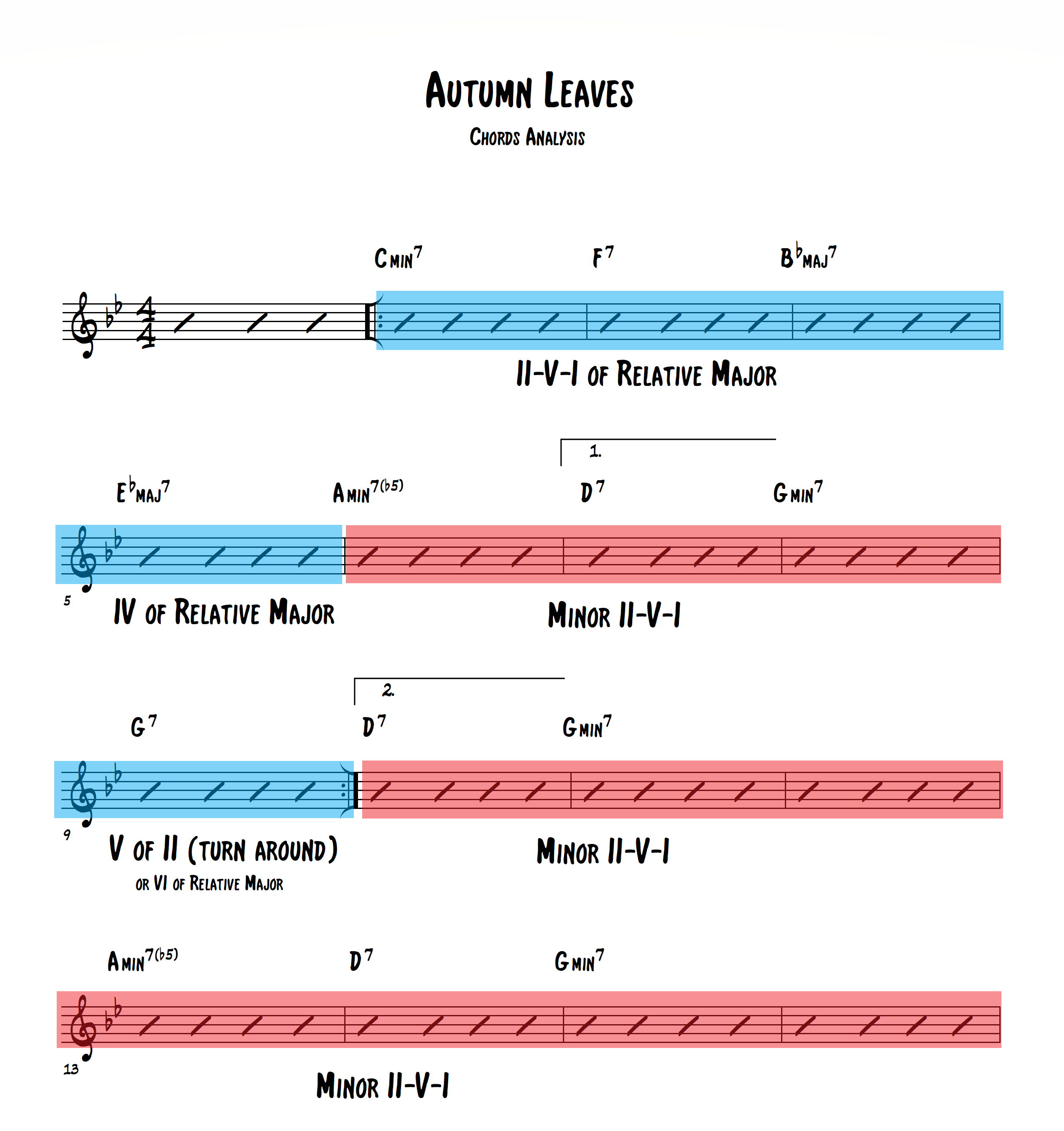 I love that I can start transferring my new skills to different pieces! Here is my progress this week:

Next week I will continue with Autumn Leaves, but I plan to go back to only using a lead sheet and begin practicing scales for improvising.

This week was all about rootless voicings on the piano.  I carried on with my work on ‘Misty’ from last week and tried a different style of comping.  I originally planned on introducing another song this week, but I found the rootless voicings to be challenging and require more time.  I tried figuring out the voicings in my head at the piano, but it was too much to think about. So I decided to break it down by going back to the theory basics and writing out each chord, determining the root, 3rd, 5th, 7th, 9th and 13th.  Then, I wrote out the chords transitions so that there would be nice voice leading and common tones between the chords.

A side note about voice leading: I studied a lot of Bach chorales in my first and second year of music school, with the goal of understanding proper voice leading. There are lots of “rules” with voice leading, but they help with problems like:

In short, good voice leading makes music sound pleasing to the human ear! I really like the end result of my progress this week:

Next week I am going to begin my final piece as part of my learning project. I am looking forward to learning my favourite jazz standard, “Autumn Leaves”.

I think we have reached the halfway point in our learning projects! I feel like I am developing more independence in my jazz playing skills (for example, I can just sit down at the piano and experiment – get this – WITHOUT SHEET MUSIC!). Last week was all about reading a lead sheet and this week I focused on the art of comping. In a jazz group rhythm section, there is usually a bass player (responsible for the root of the chords), drums (rhythmic accompaniment) and piano/guitar to fill in the chord harmonies. Comping is essentially accompanying a soloist in an interesting way. Here is my progress with comping so far:

Next week I plan to continue experimenting with different comping styles (different rhythm patterns and rootless voicings) and try out a different jazz standard.  I think am ready to start jamming with other musicians – any takers??

This week I tackled how to read a lead sheet (or fake sheet) in jazz piano.  Basically a lead sheet has a melody line and chord symbols – the musician is expected to fill out the rest (using their understanding of the style of music and the type of accompaniment required). This is where my classical background and key knowledge was very helpful, since I already know how to read chord symbols and translate this to the piano.  But the challenge this week was to read a lead sheet like a real jazz musician – incorporate 3rds and 7ths in the voicings and always make sure the melody note is the played “on top” in the right hand. Hopefully my vlog this week explains my process with a jazz standard, “Misty”.

I hope you enjoyed watching what I mean by “classical fake jazz playing” and learning to read a lead sheet.  I am looking forward to pulling out my “Real Books” (massive collections of jazz standard lead sheets) and putting my new skills to work. Next week I would like to try another style of Blues (perhaps with a walking bass line) and start looking at comping patterns in the left hand.

This site is a collection of student blogs associated with the open-boundary course, EC&I 831: Social Media and Open Education, offered by the Faculty of Education, University of Regina.